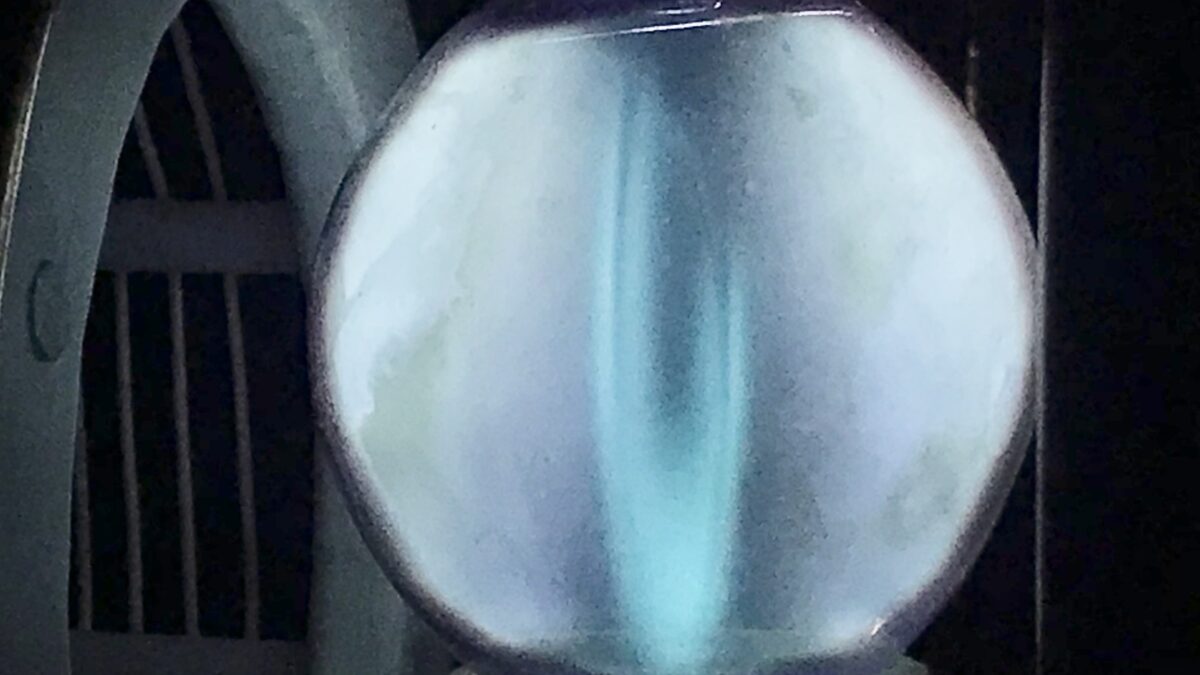 Prior to the 2022 Energy Science & Technology Conference, some interesting lead way was made in the course of re-developing the Tesla Brush Bulb. It was borne in mind that the brush formation which Tesla speaks of must have had influence with aid of the remaining mercury vapor in the glass envelope. That is, the Sprengel Pump which Tesla employed through the course of evacuating his lamps, produced minute amounts of trapped mercury vapor. Hence, the requirement of manually introducing mercury into a replicable bulb is done by allowing a connecting reservoir to be attached to the sphere, during the process of evacuation. This mercury vessel is then heated accordingly, to liberate the mercury atoms which become fixated to the inner glass lining of the lamp. It should be recognized, that the Sprengel pump does not allow for the mercury droplets in its system to be directly heated at any point. Hence, this heating will likely be a tentative variable in following experiments. It should as well be borne in mind that Tesla’s improved Sprengel Pump, as shown in figure 1, incorporated a bulb, b, of caustic potash (potassium hydroxide) to prevent the accumulation of water vapor in the pumping system by respectively heating this bulb. Although this method would have worked to an extent, as a bake-out process was not used, caustic potash molecules would have been liberated from its solution to freely venture throughout the Sprengel Pump system. Therefore, the finalized Brush Bulb would have retained some level of mercury and caustic potash encapsulated within itself. Ultimately, this may or may not have led to the brush formation, as previous experiments with ultra high vacuum alone have not yielded the brush effect.

Concerning the topic of this post, the proceeding images will be regarded.

The observed effects noticed within an evacuated sphere, under which mercury and caustic potash vapors have been added, hereto produce plasma manifestations of linear dimensions. That is, the application of radio frequency via two inward facing coils operating in CIG (cosmic induction generator) mode, allowed for the dynamic process of field cancellation to excite molecules inside the globe. The CIG setup configured in this test may also be seen in the latter half of this video:

This excitation consequentially “re-shaped” the arrangement of the caustic potash and combined mercury atoms, along with heated oxygen and silicon from the inner glass to produce light. So much so, as to produce light while forming defined edges and shapes never before seen. As shown in figure 2, the initial power of the lamp had produced a uniform misty white hue, giving forth to a separation down the bulb’s center after a couple of minutes. Following this separation, gave rise to a more defined “black emptiness” between these two halves, with the slow protrusion of a crisp mercury blue line at its center.

Shown in figure 3, the occurring lines then proceeded to form circular positions about the bulb’s inner circumference, appearing as two closely spaced discs suspended in the center. The observed white glow of the two half spheres present on either sides of the bulb cannot be fully captured by the camera used.

With respect to time, that is ten minutes, the single pair of lines or disks as seen before had then physically split off into to separate pairs of identically colored lines/disks. This exact splitting was characteristic of a cell splitting into two other cells, without any direct manipulation of its body. The true reason for this observation inside the bulb is still not understood, and may truly be a mystery. Following the line of events seen in figure 5, the lines began to slowly vibrate and oscillate without any direct correlation to the supplied energy to the coils.

As the effects observed were primarily due to the presence of mercury, the following emission spectrum was made to confirm this.

Accordingly, the strong lines presented in the lower half of the spectrum are coincidental of mercury, indicating the formations observed are likely to be a result of this vapor being present. Further research will be conducted to perfect this effect, as related to the brush formation.