The following is a series of updates in regards to the project.

I’m working collaboratively with Eric Dollard, on a project concerning a physical model of a three phase distribution system. This table top model, solely consists of a generating end, distribution line (analaouge computer network), and a receiving end. The purpose of this setup is to present information on the various transformer connections involved in practice, and the response with particular loads, specifically ones of non-linear form. Another intention is to bring light into the malpractice of wye – wye connceted transformers, and various other wrongdoings. The entire setup will employ medium-scale distribution poles and insulators, as well as surplus parts.

As goes for the generator, a General Electric Selsyn Control Transformer was first employed to produce 3 phase power. Given that the transformer possess three poles as 60 cycles is required, a rotation of 2400 RPM is needed. Yet as these devices cannot handle more than 1200 RPM, roughly 20-30 cycles of three phase power was produced. At such a speed with a rotor excitation voltage of 10v, the output voltage phase to phase was: 40v at 36mA. Given the transformers used have a 1:5.8 steup of voltage ratio, the output voltage was thus reduced to 10v at 36mA. This also allows for the accommodation of the load voltage. Therefore, if three single phase transformers are wired in three phase properly to the generator, the stepped-up voltage should yield around 60v. But in practice, an output voltage of 0.234 was produced. The Selsyn was checked with a small 6v pilot lamp connected to two phases which should enable illumination. Yet again, the Selsyn failed to light the lamp. Two conclusions can be made about the character of the Selsyn: It has a high impedance, and produces 20-30 cycles, which does not want to cooperate with the 60 cycle transformers.

As of now, I have stumbled upon a few small 3 phase motors, which may crudely act as generators when used properly. Since the motors have 16 poles, a rotation speed of 450 RPM shall roughly produce 60 cycles. I have seen multiple videos where one alone can light multiple pilot lamps at once, thus the output voltage may range from 10 – 24v. Yet this depends on the rotational speed applied. Therefore, multiple generators may be required.

As of now, I have received both three phase motors from online, and have tested their ability. Both are driven by two seperate DC motors, revolving at approximately 675 RPM, with an applied source voltage of 3.87v to the driving motors. Given that the motors possess 16 poles, an unfortunate 90 cycles is produced, rather than 60 cycles. Due to the influence of RPM, a rotation producing a 60 cycle output, would result in a very low voltage. I’m looking into the possible application of a low pass filter for a 3 phase situation. Unlike the Selsyn Control Transformer, a small 6v pilot lamp may be dimly iluminated at the receiving end of the transformer setup. Moreover, the total impedance of each transformer is of around 3 ohms, compared to the Selsyn Transformer, consisting of 1100 ohms.

Given the characteristics of the overall setup, mathematical considerations into constructing a lumped element network, so that to simulate a probable line, have been posted below. Note that these are not the final parameters for the components.

The distribution model has been completed. Rather than having the set outside, it has been mounted on a wood panel inside. Various transformer connections were used to see to what extent harmonics may spread. Similarly, two types of loads were involved: two incandescent lamps (linear), and two LED bulbs, (nonlinear). As originally hypothesized, the use of a wye – wye transformer prevailed severe sine wave distortion and propagated harmonics. Bellow are some side by side oscillograms comparing the results. 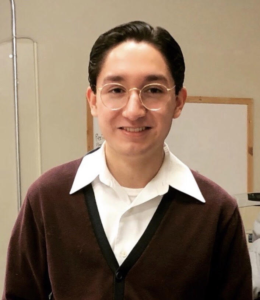 Use the following email to get in contact with Griffin Brock: